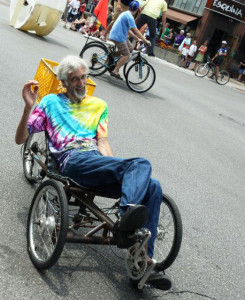 Dennis “Boog” Highberger is an attorney at the Highberger Law Office in East Lawrence. He has a general civil practice with a sliding fee scale.

Boog served on the Lawrence City Commission from 2003 through 2009, and was mayor of Lawrence in 2005/2006. As a member of the commission, he worked to promote safe, walkable neighborhoods, energy conservation and environmental protection, affordable housing, equal rights, and social justice. In 1984 he served as student body vice-president of the University of Kansas as a member of the Costume Party.

He has lived in the 46th district for all but one of the last 43 years. He currently resides in East Lawrence in a house built in 1871, and he has lived in the Oread, Barker, Pinckney, Old West Lawrence, and Centennial neighborhoods, as well as downtown and on the KU campus.